Solving DX challenges: Let's introduce Elixir to replace outdated systems with modern ones and bring them in-house. By doing so, you will develop the mindset essential for DX within your company.

Let's start with DX by reviewing our legacy systems.

Are you wasting valuable IT human resources by operating outdated systems in your company? In order to promote DX, securing and training IT personnel is a pressing issue for companies. As a way to solve these DX issues, CoreGenic recommends that you start by replacing your old systems with the Elixir language.

Do we need to switch to the latest language (Elixir) to practice DX?

Adopting a new, sophisticated language instead of the legacy language you've been using will foster the mindset (thinking style) essential for DX within your company. An organization that develops in a new, sophisticated language not only refreshes the mindset of its engineers, but also attracts the attention of the digital native generation, the future of DX talent, which in turn attracts candidates for the next generation of DX leaders.

Elixir, a sophisticated new language, is the perfect language for the Society 5.0 era. "Elixir is capable of efficiently processing large amounts of traffic in a short period of time, and is resistant to failures.

Reference
2021 Developer Survey ( https://insights.stackoverflow.com/survey/2021) contains the results of a survey of engineers around the world about what they want and how they develop in what kind of environment. Elixir is one of the top five most popular programming languages among engineers.

In the world of IT, technology is advancing at an ever-increasing pace, and soon systems and software will become outdated. In addition, the amount of data is increasing daily, and systems that used to function comfortably and crisply will become slower and more unstable as they age.

For such problems, our engineers, who are well versed in Elixir performance, and your in-house engineers can work together to solve the problems of your own system and DX by replacing it with a modern system that takes into account quality, operability, operability, and safety.

Examples of issues with the system currently in operation

By developing in the next generation language "Elixir", we will be able to improve the slow operation and provide high quality services.

Customers who do not want to spend too much time and money on development will also be satisfied.

Since Coregenik conducts agile development, we can shorten the time to service launch and flexibly respond to changes in specifications and requirements during the development process, so no time or money is wasted.

For companies that are worried that they don't have engineers who can run Elixir in-house, we also offer Elixir training.

If you are interested in the advantages of Elixir, but don't have an engineer who can run it in-house, Elixir is an easy-to-learn and highly productive language with a Ruby-like syntax, making it a good choice for in-house engineers to learn.

We also provide training on Elixir development by our CEO, Mr. Kuroda, who is the author of Elixir Practical Guide. Based on our past experience, introducing a new language and interacting with external engineers tends to refresh our internal engineers and increase their performance. We hope you will also use our "Elixier" training to renew your overall system architecture for the next 10 to 20 years. 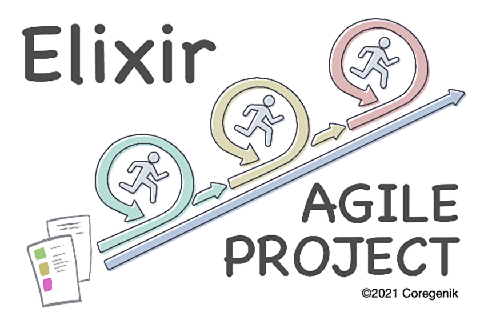